Posted by Simon on April 26, 2010
This weekend I played two games, one of Warmachine and one of Malifaux.

I played a beast heavy eKaya list with Strakhov. Kaya's feat allowed her beasts to kill off my Spriggan and retreat past my threat ranges which left me with one heavy against his three. 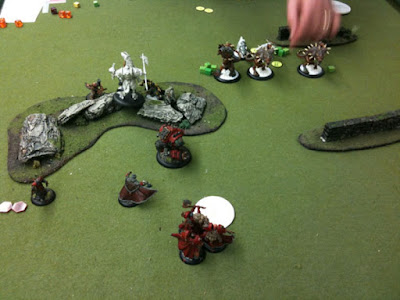 that white circle used to be my Spriggan and his beasts are far away
My Great Bears had a chance to bring down a Warpwolf but missed with four of their six attacks and got dead on Kaya's next turn. 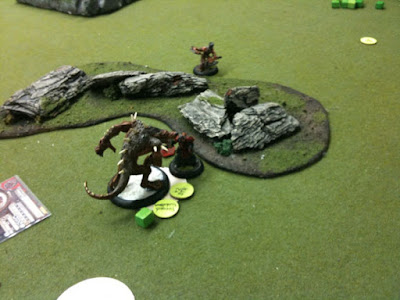 this Warpwolf didn't kill Strakhov but the next one did
Eventually the three heavies on Kaya's side chewed through my army and caught Strakhov.

On the Malifaux side I was playing with the Viktorias, 2 Ronin, a Gunslinger, and Misaki against Sonnia Criid, Francisco Ortega, Papa Loco, and 3 Witchling Stalkers.

This was only my second Malifaux game and I made a huge miscalculation against Papa Loco. I had no idea how powerful he was and when he blew himself up on turn two he killed both Ronin and left Misaki with one point of health.

The rest of the game was the Guild player mopping up, although I did manage to kill Francisco and four Witchlings (Sonnia can summon them). Even though I'm learning the game and spent a lot of time looking things up the game only took half an hour to play. I'll need to get my army set up for a tournament at the end of May.
battle reports khador malifaux outcasts warmachine