Posted by Simon on May 05, 2010
I took a long weekend vacation in San Francisco to visit Spoony and we got in a few games of Warmachine. Spoony was playing a Siege list with the following:

We wanted to check out a few of the stores in the SF area so we played games at two different ones.

I played a pButcher list in the first game with a Kodiak, Spriggan, Doom Reavers + UA, Manhunter, and Kell Bailoch. 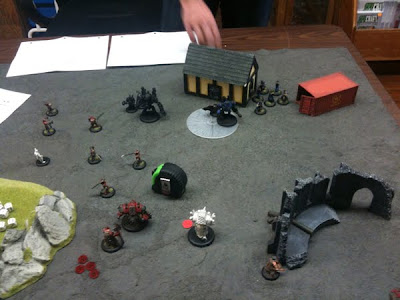 somewhere around turn 2 or 3

I don't remember much about the game. The Spriggan tore the Gun Mages apart with grenades while the Thunderhead wrecked my Doom Reavers. I was able to catch Siege near the house with my Manhunter and end the game.

The second game I tried pIrusk and some Kayazy for the first time. My list was pIrusk, Spriggan, Juggernaut, Widowmakers, Great Bears, and 6 Kayazy.

My plan was to have the Kayazy get Iron Flesh, move up with the Great Bears hiding behind, take a pulse from the Thunderhead, and then move away so the Bears could wreck the T-Head. The T-Head took out 4 Kayazy (the other two passed their super Tough checks on Irusk's feat turn) and then got mostly destroyed by my favorite bears. 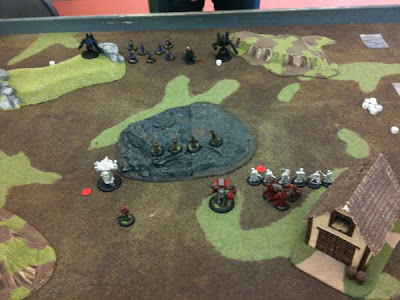 deployement
The Defender was wrecked by the Spriggan and then the game developed into a huge grind. Siege got himself on the big hill with Irusk on the other side. Over three or four turns I wore Siege's health down, rolling terribly with sword cannon shots and having my Spriggan constantly pushed around with Thunderbolts and Force Hammers. Siege couldn't do much to me but it took me forever to wear him down.

We also played a 2v2 game against two local guys we met at the first store. Their Legion and Retribution did a number on us, but everyone stopped playing seriously because we all had to leave.

Irusk was a lot of fun to play with and the Kayazy work great with him. I can't wait to field a whole unit of 10 with the UA. Spoony's army is taking shape and proved to be pretty tough to walk up to and surprisingly annoying to finish off.
battle reports khador warmachine