Posted by Simon on May 24, 2010
The tournament didn't happen exactly as planned this weekend. This was supposed to be the second of two warm up tournaments for the New England Team Tournament which is taking place on June 5th. Only four people showed up today, myself and the local Press Ganger among them.

So instead of a tournament we just played some low-pressure games to fine tune our lists. All three of the other players (two Cryx and one Cygnar) are very talented and I had my butt handed to me in both games I played. Here's how they went: 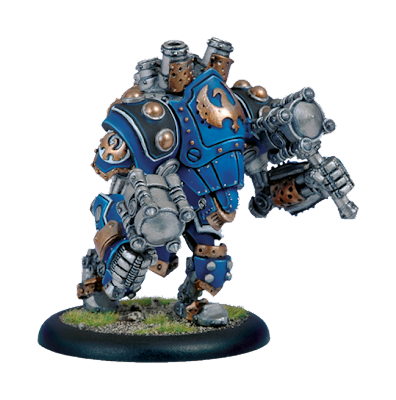 I played the Irusk list from two posts back. I really dislike playing eHaley and this game wasn't much different. I over-reacted to the cavalry coming down my left flank and ultimately left myself open on the right side for a bonded Hammersmith under Temporal Acceleration to make a mess of my flank. That attack left Irusk with two possible ways to die, and I chose to let Haley and the Black 13th shoot him dead. 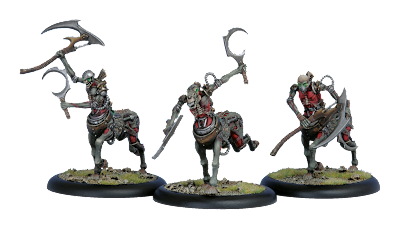 these guys are every bit as scary as they look
I went for the same Irusk list because I think it is the stronger of the two and probably the only one I'll end up playing in two weeks. This eGaspy list is really nasty. My options are to either not kill anything so the feat turn isn't so bad but get torn up, or kill a lot of stuff and have feat turn be decimating. I ended up taking out the cavalry and letting the Kayazy tie up the Banes. I died to two Soulhunters on feat turn.

What did I learn?
A lot actually.

The simplest thing I learned was that the Juggernaut is not as useful as a Kodiak, so I'll be dropping the Wardog and Juggernaut to add a Kodiak.

I learned that Kayazy are a lot stronger than I thought. DEF 19 in combat is almost untouchable, and their mini-feat is great for moving through meat shield models to get to a 'caster. Even though I was dead, my Cryx opponent let me try out an assassination run I had thought of while he was killing me.

I used the mini-feat and charged six Kayazy into combat with Asphyxious. With the Gang bonus they're effectively MAT 9 and POW 12, and I only needed five of my six hits to take out a full health Asphyxious. This is a lot stronger than I expected and is something I should be abusing a lot more.

I learned that I don't actually know how to play the game. I understand the rules and mechanics but my grasp of strategy and tactics is almost nil. I need to have a plan for each of my units and models before I make my first move. I need to be constantly looking to end the game instead of being happy to kill the other army. Not only that, I need to be aware of how my army can win before the game even starts.

These are things that both of my opponents were thinking about the whole time and were nice enough to talk to me about while they were taking my army apart.
battle reports khador warmachine