Posted by Simon on July 12, 2010
I played in a 25 point Steamroller tournament this weekend. Armies were limited to faction models only and had to be fully painted. I only brought one list, the pMadrak list I was painting last week. Six players came (2 Cygnar, Khador, Cryx, Menoth, and Trolls) and I won first place going 3-0 on the day.

My first game was against a pHaley list with an Ironclad, Lancer, Gunmages, Long Gunners, Journeyman, and a Gunmage Captain Adept. There wasn't much going on in this game because the Cygnar player was new and I had never used this army. We both tried to do damage but he had two Arcane Shields up and my Champions + Kriel Stone made it so not much happened. I won on a tie breaker because I killed his Ironclad, the only serious casualty of the game. 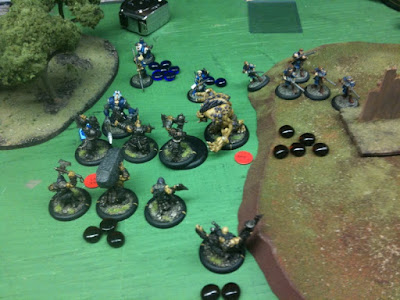 my brick right after the Mauler ate the Ironclad
The second game was against Khador. He was running pSorscha, Beast-09, full Winterguard with some rockets, Yuri, and a Manhunter. I was really nervous about this game. I figured the Winterguard + Joe were going to shoot me to death before I could do anything and then Beast would come in and clean up anything left alive.

I ended up winning this game by clearing out a few stray Winterguard, casting Rage and War Cry on the Mauler, and then charging Sorcha, who had come forward to feat and freeze my army. 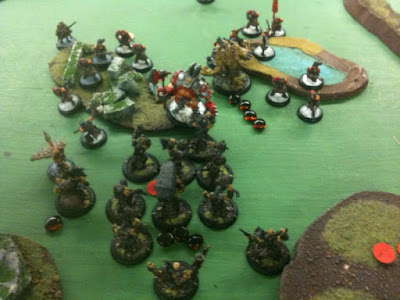 most of my brick is frozen but the Mauler ate Sorscha
The last game was against the other Cygnar player using eStryker, full Stormblades, the Black 13th, Lancer, Stormclad, and Squire. I've never played eStryker before but I knew he had a long range assassination run so I wanted to keep Madrak safe. He got a huge alpha strike on my brick using the Stormblade's assault and Stryker's feat, but my Fellcaller responded by killing 7 of them on Madrak's feat turn, followed up by the remaining Champions killing the Lancer and the Mauler wrecking the Stormclad.

The last turn saw Stryker in a tough spot. He could come up with 3 attacks on Madrak, who had 3 transfers and a fully healthy Mauler to transfer to, or he could try to kill the Mauler, hope Madrak couldn't kill Stryker, and then win next turn since I had almost no army left. He killed the Mauler but Madrak was able to roll exactly enough damage on his last attack to kill Stryker. 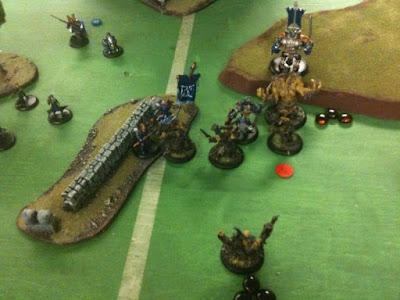 The Cygnar player and I were the only two undefeated players going into round 3 and with my win here I took first place! It was great fun to see so many painted models and to have a tournament with so many factions represented, and it was low key so I'm glad I brought the Trolls out.
battle reports hordes trolls