Posted by Simon on November 11, 2010
After weeks of painting Trolls to get ready for this tournament I headed down to my LGS this past weekend for some games. I brought my 35 point Grissel list. The tournament was a fund raiser for a local breast cancer charity so we could buy tickets for re-rolls and tournament specific shenanigans.

My first game was against a newer player who had a fantastically converted Cryx army. He was running pAsphyxious, a bunch of Satyxis Raiders and solos, full Soul Hunters and Darragh Wrathe, and some other things.

We traded Kriel Warriors for Radiers in the middle of the map while trying to control two control points. I was about 60 seconds away from claiming the only control point of the game when dice down was called, and he won on the 4th tie-breaker because he had more models in his control zone.

Sort of a heart breaking way to lose the first game of the day but it was a fun game and I should have been more aggressive. 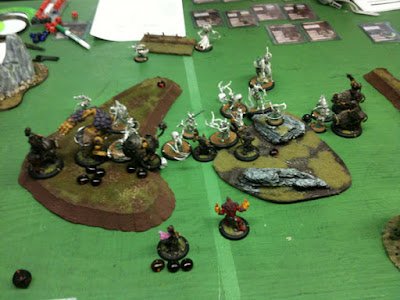 Game 2 was against a Cygnar player running Siege, Stormblades, Gun Mages, the Black 13th, a Defender, Stormclad, and Squire.

I used Hoof It to get my Kriel Warriors 17" forward on the second turn into the face of his Gun Mages on my left side. They were able to tie down that side AND score a control point before dying, and my Long Riders were able to get another one on the right side to send me up 2-0 (game to 3).

He killed the Kriels, picked up a point on that side, and by the end of the turn I was left with only Grissel and a Pyre Troll. There was no way to kill Siege and I'd be dead if he got another turn so I knew I had to pick up the third control point. The board looked like the photo below without the Bouncer and cavalry - my Pyre and his Squire and Stormclad were all contesting the control point at the beginning of my turn.

Since Grissel and the Pyre wouldn't be able to scrap the Stormclad my only option was to slam it out of the control zone. Because my Pyre was a medium base I needed to roll a 5 or 6 to get the required 3 inches - after a lot of tickets spent on re-rolls I got what I needed and slammed the 'jack into the water! Grissel mopped up the Squire and I picked up my 3rd control point for the win. 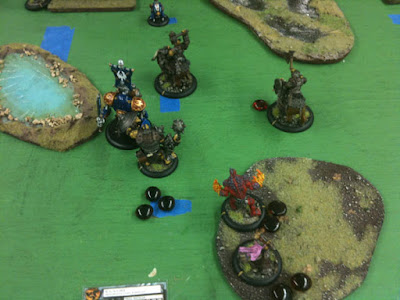 The third game was against an infantry heavy eGoreshade list. There were two units of Bane Thralls, a unit of Bane Knights, Tartarus, and some arc nodes. I wasn't prepared to deal with this list at all, and since the scenario was Kill Box I had to run forward. My army got picked apart pretty easily and I conceded after a few turns when my army was gone. 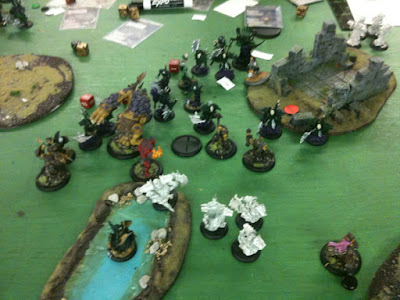 so many Banes
All in all is was a great time and between all of the players, LGS owners, and some other generous people we raised 700 dollars for breast cancer research. I didn't play as well as I would have liked but it is hard to feel bad about a tournament where you can do something good like that.
battle reports hordes trolls