Posted by Simon on December 21, 2010
This past weekend was the last tournament of 2010 at my LGS and it was at 25, 35, 50 point escalation tournament. I brought eMadrak and built a list around Burrowers, Kriel Warriors, and Champions with a Mauler, Axer, solo support, and a Blitzer at 50 points.

I played very poorly. In all three games I made questionable decisions about where or when to pop my Burrowers up. They were always effective, but not as effective as I needed them to be - they'd die on my second turn without having done enough damage to be worth it. I did learn a lot about how to work with them but I'm going to need some more practice with them.

Madrak is also a little tricky to use properly. I didn't get very good use out of his feat or his axe, so I'll need a few more games with him as well. 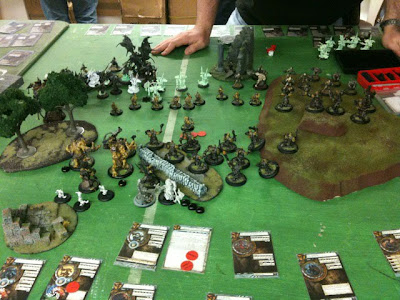 this is what two 50 point armies look like
Game 1 was against a tier 3 eButcher list running 3 units of Doom Reavers. He had first turn and my plan was to use the Borrowers + Madrak's feat to nuke 2 units of Doom Reavers on my second turn, then see what happened. He put Butcher in the middle of the board camping 3 focus on his second turn so I went for broke, surrounded him with 8 Burrowers, and went for broke. His Wardog put him at DEF 16, and with the Fellcaller my Burrowers were MAT 6. I forgot to kill the dog first so 24 attacks later I had 2 hits and zero damage. Game over.

Game 2 was a pVlad list running Beast 09, the Behemoth, and a Winterguard Deathstar. I thought I could get both 'jacks with the Burrowers and did manage to get 4 on Beast and 3 on the Behemoth. Poor planning on my part meant that the 4 on Beast didn't get the 3" charge bonus - they were able to take out 2/3 of his boxes. The 3 on the Behemoth did some damage but not enough for it to matter. His Deathstar rocked my infantry next turn and I failed on a bad assassination attempt on my third turn. Game over.

I didn't actually get to finish the 3rd game at 50 points. It was against a Terminus list running heavy infantry (Bane Knights, Bane Thralls, Mechani-thralls) and the Deathjack. Despite bad Burrower and Champion usage I was doing pretty well when we had to stop. One of the biggest problems I had here was that at 50 points I had nearly 20 medium bases, 15 small bases, and two heavy beasts clogging up my half of the board. You can see turn 2 above.

I'm not thrilled with how I played but I did enjoy the tournament and got to play some fun games. Now I'm off to visit my folks for a few days and when I come back it is time for Templecon prep!
battle reports hordes trolls