Posted by Simon on December 31, 2010
The first list had a low model count and was geared for assassination, so I wanted my second list to have the bodies to hold control points while still offering a valid assassination threat. I had fun using Grim lately so I went for a tier 4 Grim list. 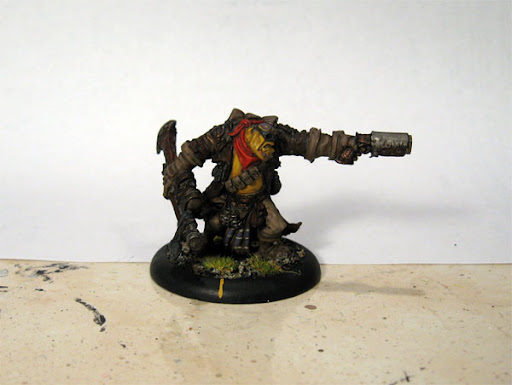 Grim's feat offers a lot of control with its -3 SPD debuff. Combined with the nerves that Burrowers give people and my ability to Advance Deploy every unit in the army I should be able to create favorable deployment match ups to get me good positioning to take control points.

I imagine my Burrowers popping up near a control point with Grim coming up behind them and popping his feat. The Burrowers benefit from the -3 DEF and clobber something while also setting themselves up to block incoming units. One unit of Scouts move in to each control point to claim the one screened by the Burrowers and to contest or possibly claim the other one. The SPD debuff should do a good job protecting the control point I claimed, hopefully allowing me to score a point on my opponent's turn as well. 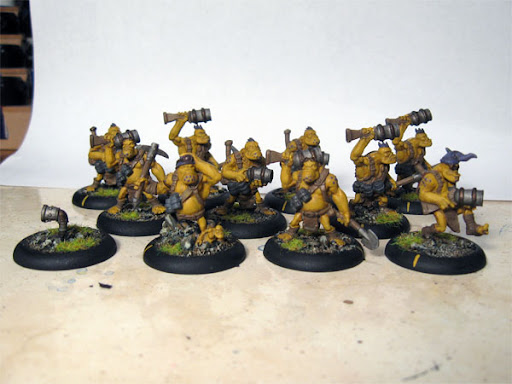 The list has a good assassination option as well. Between Marked for Death and his feat, Grim can give the enemy 'caster -5 DEF. A shot from Grim, a shot from Alten, and two boosted shots from the Bomber present a serious threat to any 'caster.

I'm not sure how Blythe and Bull will perform. They're required for tier 2 and have excellent models though, so I'm happy to give them a run.
hordes IABN templecon 2011 trolls