Posted by Simon on February 07, 2011
Templecon 2011 is over and was an excellent end to an intense month of painting and practice games. I slept very little, played over a dozen games in two tournaments and Iron Arena, won some cool prizes, met and hung out with a ton of cool people, and overall had a blast.

After hitting a ton of traffic on the ride down we arrived on Friday afternoon. I jumped right into Iron Arena and played a game on one of the scenario tables. I had 35 points of Trolls on my side against 50 points of Khador on the other side. The table was set up wide open on my side with a huge piece of impassable terrain choking the board into two tiny passes on the edges. The idea was that I had to defend the passes against the superior forces of the enemy. 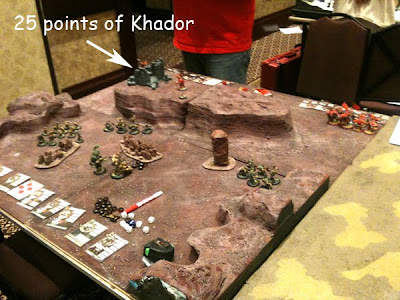 The Khador army was armour heavy (4 'jacks and 2 units of Man-O-Wars), something my Grim list isn't equipped to handle. It was also super slow, so I got bored and took the fight to him in the pass on the left, which was a terrible idea. I lost rather badly.

I spent the rest of the afternoon and evening wandering around checking out games, painted armies, and saying hello.

That night (or the next morning) was Blood, Sweat, and Tiers. We ended up playing until 7:30am.

Game 1
My first pairing was CaptainSpud of Lost Hemisphere fame running a very nicely painted pCaine list that had two units of Gun Mages. I ran eDoomshaper, figuring he'd have a lot of trouble with two heavy beasts and ARM 18 Champions. He did, but a collection of errors on my part saw my beast sling-shot fall short of Caine and put Doomie in a bad spot. It took his whole army, down to literally the last shot, but Doomie died. 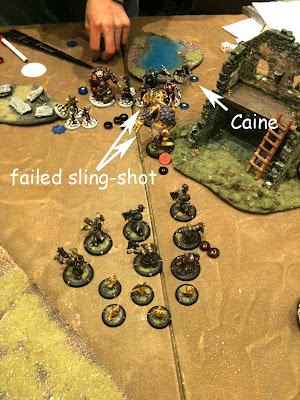 Game 2
I got sleepy at this point and forgot to get my phone out for any more pictures. My opponent was running Rasheth, the new Skorne warlock, with three Titans. Grim can't handle that much armour so Doomshaper came out again. He charged my Mauler with a Bronzeback on turn 2 but missed by about half an inch. I figured I'd kill the Bronzeback with my Mauler (the Earthborn was tied down by some Gatormen), tie up his other two heavies with my Champs and Scouts, and deal with them one by one with my pair of heavies.

My Mauler's damage rolls had some of the worst dice-hate I've ever seen and I barely scratched the Bronzeback. On his turn he nuked the Mauler while the Gladiator and Cannoneer worked their way through the models I had tying them up, leaving my Earthborn to deal with 3 heavies all on his own - no surprise that it didn't work.

Game 3
I was paired up against a very skilled player that I've played before running an Ashlynn list with two Gun Mage units. This seemed like another good match up for Doomshaper. Details start to get fuzzy as this was around 4am but I remember getting jammed up with my heavies and Ashlynn taking the final points off Doomie with boosted Twisters.

Game 4
My last game, around 6am, was against Epic Vlad, 6 Ulhans, and Markov. I was too tired to think about how to play Grim so Doomie came out for a 4th time. He made a big mistake in letting his Ulhans get too far forward and my two Dires ate them without much retaliation. I was feeling good about this game but he snuck the last Ulhan around to Doomie while tying up my Dires with a Berzerker and Drago and that Ulhan and some Widowmakers popped Doomie. 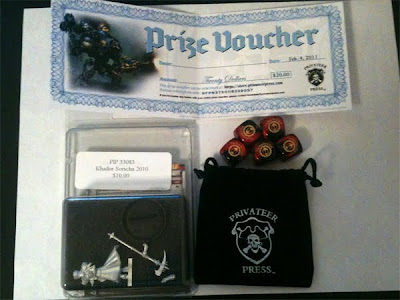 Even though I went 0-4 I consider this evening a success because I won two prize drawings! During the third round I won a Sorcha 2010 resculpt because I was playing a tier 3 list and at the end of the tournament I won 20 dollars to the PP store in the fully painted army drawing. - pretty awesome.
battle reports hordes templecon 2011 trolls