Posted by Simon on March 23, 2011
While I was away on vacation the slow-grow league at my LGS kicked off with a 15 point tournament. Even though I missed the tournament I'm still able to buy into the league at the 15 point level. Here's the list I'm thinking about bringing:

This is not the list I had originally planned to use, but when PP previewed the new Gun Mage sculpts coming out next month I knew I had to wait on them. 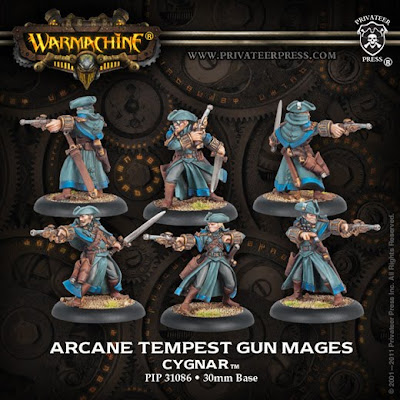 image from PP - these guys are awesome!
The general plan with this list is to put Quicken on the Forge Guard, turning them into SPD 6 Weapon Masters with Reach. Rhupert's Dirge of Mists can get them up to DEF 13 (not bad!) or he can give them Pathfinder.

The Nomad is going to take some getting used to for me. Coming from Khador and Trolls I'm used to super heavies trashing everything they see and the Nomad just isn't that sort of 'jack. I'm thinking about putting Admonition on him and throwing him way forward, daring my opponent to make a move and capitalizing on what happens.

Gorman wasn't in my original plans either but I have the model currently so I'm going to give him a try. He can help keep Ashylnn safe in the early turns from shooting and then help out on my assassination runs during the later turns.
mercenaries warmachine