Posted by Simon on April 25, 2011
I've had to miss out on a few weeks of the league but I did get down to the LGS this past weekend for my first and only game at the 25 point level.

I played a game against an Absylonia list with a Sythean, Carnivean, some lesser beasts, and some solos. I did not know her abilities at all and mis-read her feat when I looked at the card. My Nomad and Gun Mages tried to take down that Carnivean but were a few boxes short. That's a big mistake against Absylonia and my opponent made the best of it. 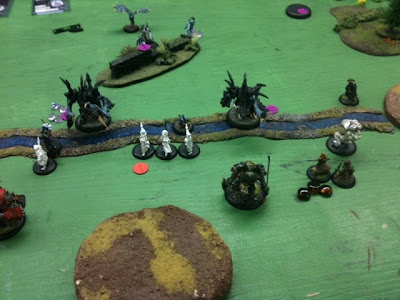 Legion heavies hit my lines
Ashlynn was able to do some big chunks of damage to Absylonia with hand cannon shots but it was a last ditch effort and couldn't finish the job.

Even though I lost I love the additions of the Gun Mages and Mule. They made the army even more fun to use (and it was already super fun) and were loads more effective than the Forgeguard. The models were absolutely worth waiting for as well.
battle reports mercenaries warmachine