Posted by Simon on June 30, 2011
I've been giving a lot of thought lately to fleshing out my Mercs force with some more 'casters. I'm in the process of trading some 40k models for some more Merc models (hooray!) but today I want to take a look at the new Merc hotness, Captain Damiano. 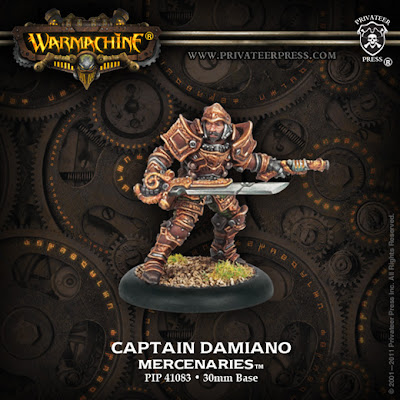 image from Privateer Press
Stats
Damiano has pretty basic stats for a 'caster. His MAT 7 and CMD 9 are good looking but everything else is average.

Weapons
Damiano sports a magical Hand Cannon that can get a 3" AOE for one focus and P+S 12 magical sword. Nothing really special on either of these weapons although the magical pistol could be useful for knocking out Incorporeal solos.

Abilities
Paymaster allows Damiano to give out one of two buffs to friendly Steelhead units. Damiano has 5 coins to spend on these buffs. One buff allows a free 3" move at the end of the unit's activation and the other gives +2 to ranged attack and damage rolls.

With all of the clever movement tricks that Steelheads + Stannis can do the reform moves will have a ton of uses and the buff to ranged attacks will be a big boon to both the Steelhead Cav and Riflemen.

Feat
The Feat gives friendly models +3 ARM and STR for a turn and also prevents them from being moved during your opponent's turn. This takes normal Steelheads to P+S 14 with 3d6 on the charge which is not shabby at all. The ARM boost probably won't save them from any reprisals but it does take Merc 'jacks up to Khador levels of durability and Damiano himself can sit comfortably at ARM 19 for a turn.

Additionally, with a little extra on your turn a lot of potential assassinations that rely on moving your models out of position will be significantly tougher to pull off.

Spells
Damiano has a great spell list to support his army. I'm very familiar with Surefoot and the bricking potential it brings to an army, plus it pushes Damiano up to DEF 17. Combined with Rociante and his feat you're looking at DEF 19 ARM 19 - a very tough nut to crack.

Death March looks perfect for Halberdiers, Forge Guard, or Boomhowler. They all benefit from the MAT boost and Vengeance will get them up the field very quickly.

Deadeye and Warpath seem a little more situational but still very useful while Convection probably won't see too much use. Focus looks like a problem for Damiano since he has 3 good upkeep spells.

Final Thoughts
Damiano looks to be a great tool box / support 'caster with a focus on infantry. At 35 points I'd be surprised to see him with more than one 'jack, and further surprised if that 'jack wasn't Rociante. Here's what I'm thinking as a starting point for a 35 point list:

This is 21 points and leaves a lot of space for more infantry, solo support, and maybe another 'jack. Right now I'm thinking about a combined arms force with Gunmages and Aiyana & Holt added in. Wyshnalyrr may also make an appearance to help manage all of those upkeep spells.

Also, I love that this guy is the IK version of Don Quixote. I like his Spanish vibe a lot and I'm thinking about buying some of these resin heads for my Halberdiers. 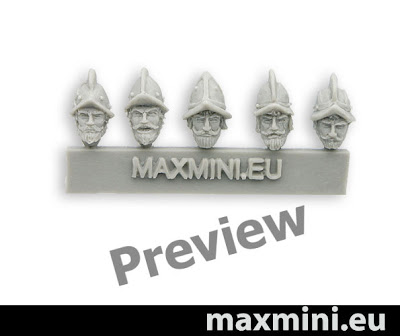