Posted by Simon on June 23, 2011
Wrath is finally in my hands and I'm super excited because it is the first PP expansion to come out since I started playing. Here are my early impressions on the new Khador 'caster, Kommander Harkevich. 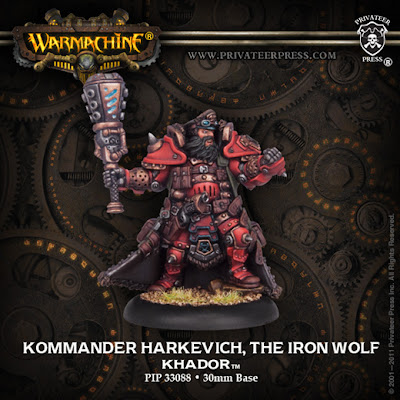 image from Privateer Press
Stats
Nothing seriously impressive or outstanding here. MAT 7 is kind of cool and DEF 15 is pretty good but not terribly special.

Weapons
Hand Cannons come standard on Khadoran Warcasters and this one will probably see good use under Harkevich's feat and his spell Broadside (more on that later). His mace has a solid POW 14 and is magical. It also has Beat Back, allowing for some interesting possibilities with movement shenanigans.

Abilities
He grants all models in his battlegroup Pathfinder, including himself. This is pretty sweet. His feat and spells look to synergize well with ranged 'jacks but this little nugget also gives a huge boost to 'jacks looking to get stuck in after they've shot.

Feat
Now we're getting interesting. The feat gives a significant ARM boost to battlegroup models, lets them charge or slam for free (with Pathfinder!), and allows them to make a normal ranged attack before that free charge or slam. This shot doesn't ignore ROF restrictions but it allows 'jacks to shoot, charge, and then make their normal melee attacks, something they're not normally allowed to do.

Spells
Three spells on Harkevich's list stand out to me. The first is Broadside, which allows battlegroup models to make a shot that ignores ROF. This is awesome. On feat turn with this spell, Harkevich's 'jacks get to make two shots for free, then charge for free with Pathfinder, and then make their attacks in melee.

Escort is an upkeep that gives his battlegroup a speed boost and gives Harkevich an ARM boost. Fortune is another upkeep allowing a model/unit rerolls on missed to hit rolls.

Right away I'm noticing that with these two great upkeeps and Broadside Harkevich is left with just one focus a turn to allocate. A Koldun Lord might help here and so can the new Merc attachment Wyshnalyrr but I see Harkevich being rather starved for focus all game long.

The other two spells are interesting but not as obviously applicable at the above three.

Final Thoughts
Harkevich certainly looks interesting. He has some very good battlegroup spells that point strongly to him being a 'jack heavy 'caster focusing on ranged attacks. He also has a few tricks up his sleeve that allow his 'jacks to have 9" charges with Pathfinder, something you won't see too often from a Khador army.

I'm not sure yet if I think he'll be a super powered tournament level 'caster but I am sure that he looks like a lot of fun.
khador warmachine