Posted by Simon on June 14, 2011
This past weekend was the 50 point tournament that capped off the slow grow league at my LGS. There were 10 players (nine and one TO playing the bye position) and a good spread of factions. I went 0-3 on the weekend. I had hoped to play better but there were a number of very talented players using strong lists and I haven't played in a while.

This game was a mess from the start for me. I wasn't thinking at all and just started moving models around and rolling dice with no plan. 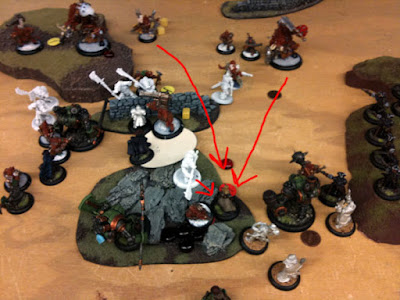 dead all over
After a while a Farrow Brigand with Quagmire ran behind Ashlynn and gave her -2 DEF. She then got demolished by a Slaughterhouser, Carver, and a War Hog.

This is a terrible match up for my shooty Ashlynn army. Swamp Pits negate all of my shooting and Barnabas's feat cancels out all of the defensive capabilities of Ashylnn's feat. Add in the high ARM of Gatormen and the Gator beasts and I was in for a rough game. 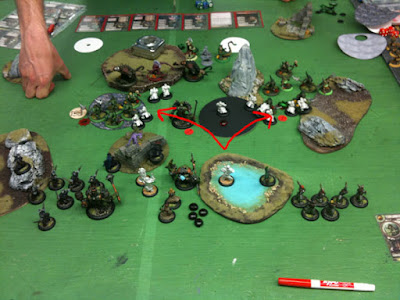 failing important Fear checks
I had a pretty good idea early on to split my Forge Guard to engage both Gatorman units. I wanted to kill 2 Gators from each unit, jam up the chokes on each side, and snag an early control point. Because of the swamp pits on the board I chose to have Rhupert give the Forge Guard Pathfinder instead of making them Fearless - they passed the first Fear check but failed the second and at that point the game was mostly over for me.

I managed a clever assassination run late in the game but didn't have enough to see it all the way through.

Same thing, new player. This time around I used the Forge Guard (now with Fearless) to jam up the choke on the left side while I cleared out the right hand side and scored an early control point. 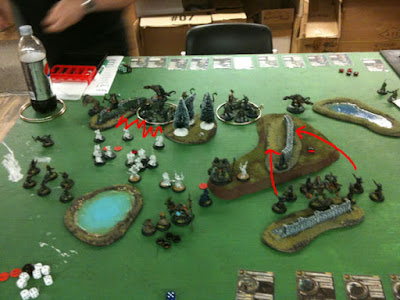 early plan success
There was a lot of killing on the left side of the board and I started to lose control of it while the Gators slowly forced me back from the right side as well. Barnabas's feat put me in a bad position and, faced with losing the game to control points, I tried and failed to kill Barnabas.

Overall a fun tournament but I was hampered by some bad match-ups and my own rustiness. I'll be putting down the Mercs for little while and getting in some games with my Trolls in preparation for the NE Team Tournament in July.
battle reports mercenaries warmachine