Posted by Simon on June 09, 2011
This coming weekend is the final day of the league and will be a 50 point, single list tournament. It will also be the last chance to gain points in our ladder and the top three players will form our team for the New England Team Tournament. I'd like to attend so I'm looking for a good showing on Saturday. 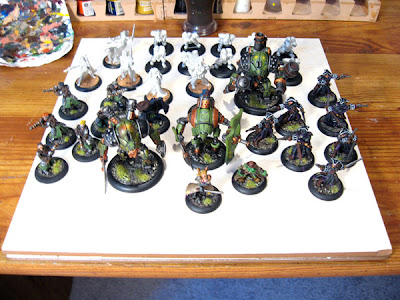 not as much painted as I wanted but not bad
It is quite shooty which is where I've found the most success. I'm looking to hold the middle of my lines using the Forgeguard and Rhupert with the Nomad, Vanguard, and Ashlynn as a second line. The Gun Mages and Riflemen will be on the flanks supported by Eiryss, Taryn, and Gorman. I'd still like to get a combination of Ragman and Aiyana's Harm on something but I think more likely I'll be using them to target two different things.

If I can get some wins I imagine they'll come from a shooting assassination. In a perfect world I'll get a Gorman Blind Bomb + Harm + Ragman on the enemy 'caster, Taryn will remove any LOS blockers, and Eiryss will either remove focus or deal 3 damage right off the bat. Once all that is set up I'll be free to throw 4 Hand Cannon shots, 3 two-man CRAs, 7 Gun Mage pistol shots, and a Mule cannon at the 'caster.

Obviously that won't happen but there is sufficient support and firepower to make it work even without all of the pieces.
mercenaries warmachine