Posted by Simon on July 07, 2011
I've been super busy lately with stuff non-hobby related but I did complete these guys last night. 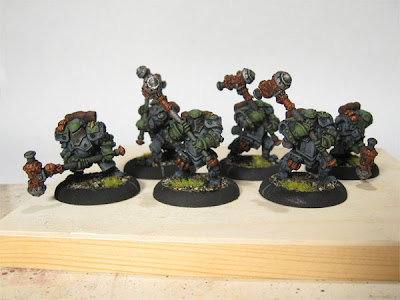 Forge Guard have been a mixed bag for me. I was really excited to use them with Ashlynn because she makes them SPD 6 weapon masters with reach - what's not to love? I was thinking that their ARM 18 would keep them safe while they got into position but it turned out not to be and early on they just died a lot.

I switched my thinking to having them tarpit and they were a lot better at that. Since they have reach I can engage a lot of enemy models with just a few of mine meaning they can tarpit in waves. Also, as the waves charge in they kill a ton of stuff since they're weapon masters and sometimes I'd get lucky and they would crit slam stuff.
I've got another four to paint but I'm probably going to move on to something else first.
mercenaries painting warmachine