Posted by Simon on July 26, 2011
Rumors were flying this past weekend because Jarl Skuld, the new Troll warlock, was on sale at Comiccon! 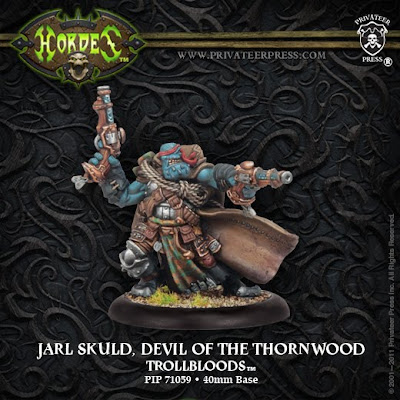 image from Privateer Press
Stats
Nothing special here. Fury 6 is average and RAT 7 is solid for his guns.

Abilities
Black Penny is a pretty cool thing to have for a guy packing two magical hand cannons and access to Snipe. Evasive, Swift Hunter, and Pathfinder will allow him to be all over the board to make his shots count. Gunfighter means he won't be totally shut down by being engaged.

Spells
This is where the fun is.

As if Quicken weren't enough to get Jarl's army moving, enter Tactical Supremacy. I'm thinking that Champs with Skaldi can charge forward, use Follow Up to kill more stuff, and then consolidate using this spell to get their defensive bonuses.

Weald Secrets is another movement buff for Jarl's infantry and saves the Fellcaller from having to give a unit Pathfinder.

Three of these spells are upkeeps and Jarl is going to want Far Strike most turns so I'm thinking he'll be a little short on Fury for transfers.

Feat
The spoilers are a little unclear about this but it sounds like he'll get to place at least four 4" AOE cloud effects in his control area. They don't block friendly LOS and friendly models get Pathfinder and can move through things while they're in the clouds. There is also some rumored penalty to enemy models that move through them.

It sounds like a cool board control feat to me that can help zone off sections of the table or allow a free-ish turn of movement.

Overall
Jarl sounds like a very good infantry support warlock, especially in the movement phase. His guns are nasty against infantry and solos but he won't be able to seal the deal against enemy 'casters alone. Mostly he looks like a lot of fun (and what a model!).
hordes trolls