Posted by Simon on July 19, 2011
This coming weekend is the New England Team Tournament and we had 11 guys at the store this weekend helping our team get ready. Our team asked me to bring a beast heavy eDoomshaper list and an eMadrak list with Burrowers so that was what I was playing.

This was a combined arms list with two arc nodes, a Harrower, Bane Knights, Black Ogrun, and some support solos. I was running a Tier 4 eDoomshaper list with Mulg, Earthborn, Mauler, and 2 units of Champs. 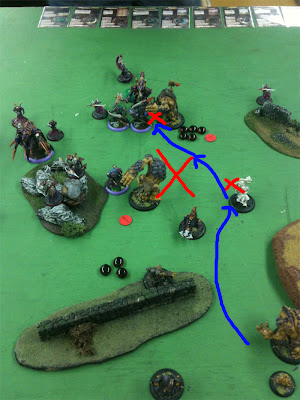 My opponent hadn't seen an eDoomie feat turn before so I was able to get Mulg into his face on turn 2. You can see above that it took a charge and 3 goads to get him there. I had enough Fury to buy one attack and then used the free attack from Doomshaper being on the table to kill Scaverous.

We were both curious about Scaverous and his feat turn, so after the game we played it out assuming Scaverous hadn't died. He was able to quite easily assassinate Doomie with his feat and some nasty spell casting - another Cryx 'caster to watch out for.

My opponent was trying Cassius out for the first time and I decided to try eMadrak at 35 points. Cassius was super aggressive and got right in my face in turn 2 and feated. I think he was relying on my lack of pathfinder (my Fellcaller got sniped) and the sight restrictions of the forest to keep him safe but my Burrowers were able to pop up around the tree and Cassius. 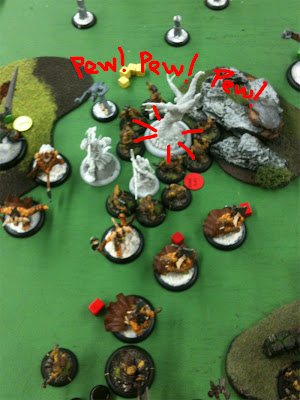 With Madrak making them weapon masters and his feat giving them each 3 attacks it didn't take long for the tree to go down.

I was not prepared for the beatdown I got in this game. He was running 4 heavies, Hex Hunters, and some solos. I was using eMadrak with a Bomber, Earthborn, Burrowers, Kriel Warriors, and some other light beasts and solos. My plan was to hit him with waves of weapon masters (Burrowers first, then Kriel Warriors) before finishing with Madrak and the beasts.

Everything went terribly wrong on his second turn when he used sprays and the Hex Hunters' magic to kill nearly all of my Burrowers and Kriel Warriors. Suddenly I was looking at his 4 heavy beasts against my 2 + Madrak. I tried to bait one of his heavies out while also maneuvering for a Bomber assassination but my opponent was too smart to fall for either.

He picked the rest of my army apart over a few turns and took a very comfortable win.
battle reports hordes trolls