Posted by Simon on February 09, 2012
Hardcore was something I've wanted to do for a while.  I love playing with painted models and I wanted to experience the challenge of competitive, fast paced tournament format.  I fully expected to have my ass handed to me but I was excited for the experience none the less.

I built this list because I thought it would be flexible and be reasonably 'jack heavy for time considerations.  It also had some nods towards being fluffy and fun.

These were terrible mistakes for Hardcore.

I kind of knew this but as the event got closer I started to suspect it more and more.  I had nothing to seriously threaten high armor targets, just a lot of infantry, some weak 'jacks, and two Obliterator rockets.  By the time Saturday morning rolled around I was nervous about my list and nervous about the tournament in general.


I'm already in trouble because there is no way I can deal with 4 heavies, especially considering Absylonia's feat.  I decided to open the game with some serious aggression.  My plan was to throw everything at a single heavy on turn 2 and kill it outright, then see what I can do for the rest of the game.

After two boosted Obliterator rockets, shots from Holt, Eiryss, and Kell, and two 5-man CRAs from the Riflemen I'm left staring at a Sythean with 4 boxes left and a bad feeling about game 1. 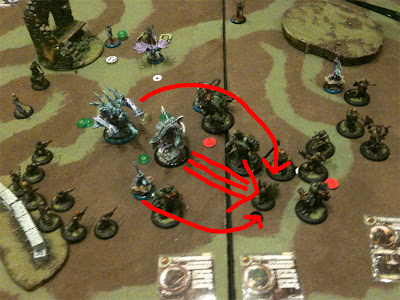 death by all the fire

I was able to mount a surprising come back with some risky play over the next few turns that resulted in my killing two heavies after Absylonia feated but also left me open for a Ravagor + Typhon ranged assassination attempt that smoked Magnus.

My opponent's stuff was painted very well and he was a great guy to play against.

Game 2
Epic Doomshaper with Mulg, an Earthborn, and a Bomber, some Champs, a Krielstone, and some solos.

Again, I'm feeling worried looking at this heavies and my inability to deal with them.  I do know what he's planning here though and my plan is to win on scenario.  I fill the zone closest to my deployment zone with Boomhowler and his trolls while aiming to nuke his Champs on my left side and fight for the furthest control zone.

I'm making pretty good headway on both sides of the board and he triggers the eDoomshaper Dire Troll delivery system.  Both Mulg and the Earthborn fail to get damage on Magnus and I'm feeling pretty good about my position.

I decide to give 3 focus to each of my heavies and really go to town on Mulg and the Earthborn.  Magnus walks into combat with Mulg needing a 5 to knock him down. 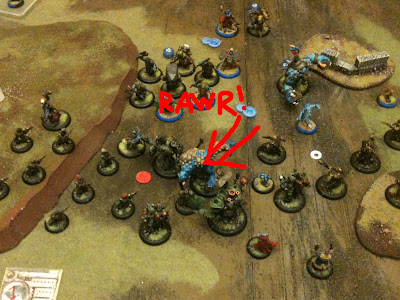 this didn't need to happen

Now we have a problem.  The Mangler and Nomad manage to kill Mulg but I was so focused on killing him to save Magnus that I forgot to screen him from the Earthborn.  My opponent takes full advantage of his second change and splats Magnus quite easily.

This was a stupid way to lose and I was pissed at myself.

Game 3
Siege with Rowdy, and a Defender, Sword Knights, a Storm Tower, and some solos.

Another situation where I can deal just fine with the small amounts of infantry and solos but have no good answer for the armor across the table. 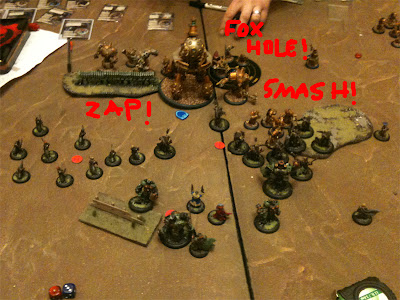 I tried a similar plan from last game but Siege's feat demolished me and the game got quickly out of hand.  He managed to kill everything except Magnus before dice-down (Feign Death FTW!) and I was playing very badly the whole time.  I did manage to take out the Storm Tower, so a small victory there.

A very friendly guy though and we talked for a while after the game and tournament.

Game 4
Someone dropped from the tournament after the 3rd round and since I was the worst player in the tournament I got a bye.  Probably a good thing because I was reeling from my previous few games and I imagine I wouldn't have played this game well at all.

Conclusions
I didn't struggle in this format nearly as much as I thought I would.  I was very nervous about 7 minute turns and keeping everything straight in my head but for the most part I think I did well.

The Hardcore meta really favors beast heavy Hordes lists.  The amount of damage three or four beasts can put out in one turn is huge and there isn't much a Warmachine list can do to counter it or even match it.  The lists I saw weren't terribly balanced, they were there to kick serious ass and by hyper aggressive.  I kind of knew all this going in but didn't realize how true it was and how seriously bad my list was for this format.

I had a lot of fun and will be back in Templecon Hardcore next year much better prepared.
battle reports mercenaries templecon 2012 warmachine