Posted by Simon on May 08, 2012
One of my favorite bloggers, Roman from Massive Voodoo, always talks about the joy of painting.  His posts are filled with his excitement and love of painting toy soldiers and I'm always inspired by his ramblings about color, music, and the hobby.

Lately it has been very quiet around here.  Much of that has to do with real life stuff.  I'm getting married in a year, my fiancee and I are trying to buy a condo, I was supposed to run the Boston Marathon but deferred my entry literally the night before and then continued to train for another race three weeks later, blah blah blah...

If I had wanted to though, I could have found time to paint.  Mostly I just didn't want to paint because I had lost the joy of it.  I was burned out from army painting for Templecon and I was too focused on finishing my Trolls so I could start working on my Khador.  Somewhere along the way I had lost the point and was more interested in having painted models than in painting models.

I've already put the Champions away (no more speed painting) and started working on one of my favorite models, the Journeyman Warcaster.  I've painted this model before as part of a mini exchange.  I was very happy with how the first one came out but I'm already more excited about this version.  He'll meet the same fate as the previous one and be gifted away.

Here's a quick WIP shot to show you where I'm going with him.  This came off my shiny new phone which gives me hope for being able to take quick photos without setting up my lights and tripod. 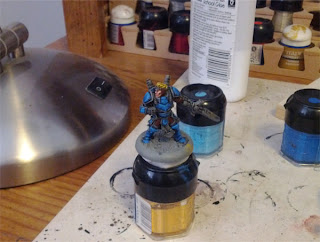 After this fellow I'm not sure where I'll head.  I have a few interesting models on my shelf but nothing that is really calling to me.  I have been toying with a few ideas in my head but I'll hold onto them for now so I don't make any promises I can't keep.
cygnar painting warmachine