Getting Back to Gaming

Posted by Simon on September 07, 2012
This weekend there is a 20 point scenario thingy at my LGS that I'm planning to go to. It is some kind of king-of-the-hill something-or-other and is limited to beasts / 'jacks only.

These will be my first games since mid-March so I'm aiming for fun more than anything else.

I wanted to take my Khador but I don't fancy any of my 'casters successfully running 'jack heavy so now I'm thinking about taking this Troll list: 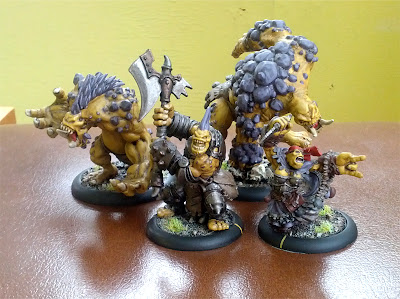 Calandra doesn't do anything obviously awesome for beasts but I think there could be some potential here.

Also, Rage and Rush are two super strong animii and Calandra has the Fury to cast them when and where they're needed.

I'm a little worried about Calandra being a very squishy target in a sea of beefy killers and also the fact that I've never played her. However, I've got her painted and I think she'll be fun so this is probably what I'll be running.
hordes trolls