Posted by Simon on April 07, 2013
Or maybe Blue Ivan? I tried highlighting the black armor on Ivan up to blue instead of gray like I normally do. After layering some dark blues on top of the black primer I washed everything with black. I think it looks good in front of me but I don't know of the contrast is enough to translate on the table. 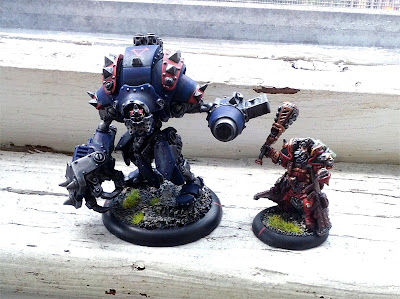 He looks a little more blue than black but I enjoyed painting this guy and think overall it was a good experiment. I'll probably try it again when I paint my Black Dragon Iron Fangs.
khador painting warmachine