Posted by Simon on September 21, 2010
Summer is a little slow on the Warmachine front in my LGS. However, with the weather cooling off and people taking fewer vacations our local Press Ganger has a plan to get everyone excited about playing again - he's putting together a tournament series and the winner of the series gets a free ticket to Templecon 2010!

I had mixed feelings about the last gaming convention I went to, Games Day Baltimore 2009. However, since the local Press Gang team is heavily involved in planning and running Templecon and many of the local players have attended I've heard a lot of good things in the past year and I'd like to attend this year if I can. A free ticket would go a long way to convincing me.

Here's the deal. There are four tournaments at my LGS between next weekend and January 1st. The top 3 finishers get 5, 4, and 3 points respectively while everyone else gets 2. An additional bonus point is awarded for having a fully painted army. After the four tournaments, whoever has the most the points wins the ticket to Templecon (there are a few more rules but that's the general idea).

I'm not the best player around but I think I have a chance to take second or third in a few of these tournaments, and I'm planning to always pick up that painting point. My biggest concern is that I can't make the first tournament this weekend and that might put me out of the running before I even start, but I'm still going to give it a go.

In the spirit of getting my Trolls all painted for these tournaments, here's a quick WIP shot of my Kriel Warriors after a little painting time tonight: 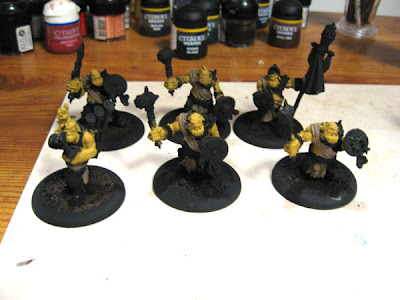