Opponent - eMakeda Molik Karn missile with all the bells and whistles. I asked my opponent to play this list so I could see Karn in action.

What I learned - Molik Karn will do what he wants up to about 20", including nuking my Earthborn on the first turn. I was able to get my Mauler on a solid assassination run on eMakeda but missed two attacks needing 9's on 3 dice. Apparently my dice hate it when I try to kill the enemy 'caster. 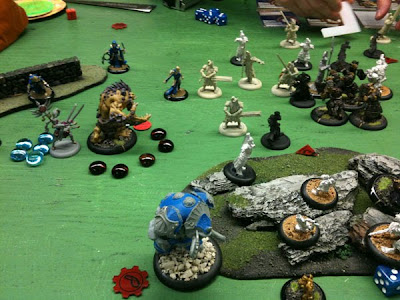 What I learned - Not a whole lot. I didn't know how to play against this list and was in a bad position until Markhov missed a lance attack that would have killed 5 Kayazy in the AOE. His plan fell apart after that and I was able to decimate his army on my next turn under Butcher's feat.

What I learned - Sometimes the Earthborn missile is a bad idea, like when Strakhov is DEF 17 near the Wardog. I left Strakhov on 2 health on my second turn but got a second try with the Earthborn on my turn 3. It was still a bad idea to try to hit DEF 17 Strakhov, so Doomie had to use Primal Shock to finish Strakhov off. Also, Torch is a monster when he is bonded to Strakhov.
hordes IABN khador templecon 2011 trolls warmachine