Posted by Simon on February 10, 2011
Blood, Sweat, and Tiers ended at 7:30am and I got to bed at 8:00am, so Saturday didn't start for me until 2:00pm. I wanted to try to get a few Iron Arena games in before Death Race that night so I started looking for opponents.

The first player I found was running a very 'jack heavy eNemo list. I brought out the Grim list I didn't get to play the previous night. 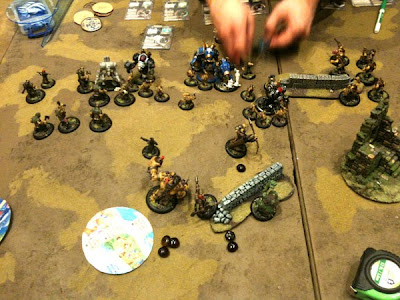 I used the Burrowers and Grim's feat on turn 2 to pin all of his 'jacks in place while the two units of Scouts ran around them. On my turn 3 I was able to get the Bomber, Impaler, and some Scouts to shoot Nemo to death - my first win of Templecon!

I was feeling pretty good (that was the first time I really felt the Grim list worked well) and found a Skorne opponent playing Mordikaar and a scenario table to play on next. The table had four blue crystals in the middle that were objectives, first to 2 won. 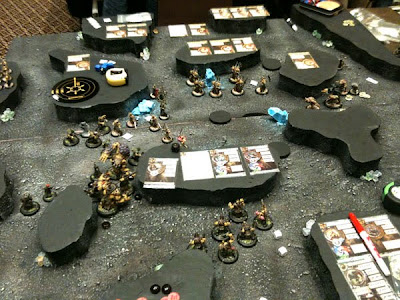 His list had two Incorporeal solos and Mordikaar could make a unit Incorporeal, so he won this on turn two pretty easily because he could ignore the terrain and I couldn't. Neither of us realized this game would go like this when we started and by the time we figured it out it was too late.

After those two games I had dinner and a nap to prepare for the tournament I was most excited about - Death Race!

Game 1
If there's one game I was upset about losing over the whole weekend it would be this one. My opponent was running eMorghoul with Molik Karn, a Gladiator, Cyclops Brute, and some skirmishing infantry. Karn terrifies me and my plan if I was going to face him was to feed him a Kodiak, counter with Butcher and the second Kodiak, while hoping that my Kayazy could take down the other 'caster. 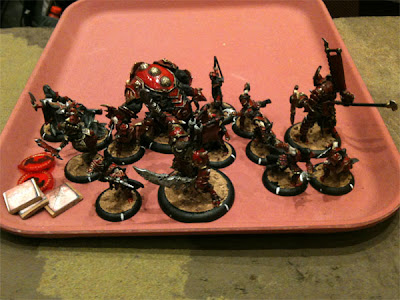 He threw Karn and the Gladiator forward and on my second turn I was able to charge both with Kayazy. Between Fury and Butcher's feat I was able to blow Karn up and leave the Gladiator with two boxes left and I was feeling on top of the world. I used my Kodiaks to kill some infantry with Vent Steam because I got greedy and it cost me the game. Morghoul charged in and took Butcher apart.

I really should have seen what was going to happen because I knew Morghoul was more than capable of killing me but I was so amped up on killing Karn that I stopped thinking.

Game 2
I was paired up against a guy from my store running a Strakhov list. We practiced these lists against each other a lot leading up to Templecon so we both knew what to expect. I was able to get the drop on Strakhov first but seriously bombed my dice rolls. 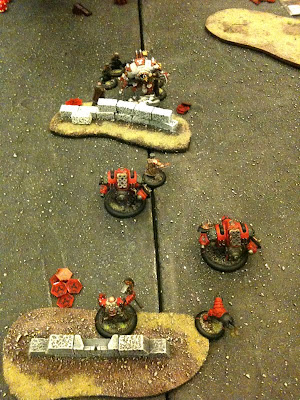 Kayazy get to Strakhov but I can't roll dice to save my life
In the ensuing few turns we both had epic dice failure until Beast 09 and Fenris eventually got themselves back on the dice bell curve and killed Butcher.
Game 3
My third game was against Reznik running five light 'jacks and a Choir. This was my first game against Menoth ever and I didn't know what to expect. 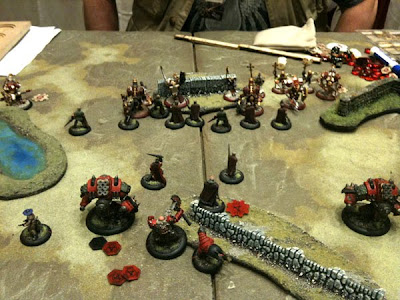 I was able to engage his lines on my second turn (the photo above) and got in a charge on my third turn. My dice took a 180 from last game and a single Kayazy took Reznik from full health to zero in one shot - awesome!

Game 4
The last game of the tournament was against a young player running Saeryn. I have very little experience against Legion so I did my tried and true strategy of Kayazy + Iron Flesh + running forward. He jumped Saeryn in the middle of my army, did a few points of damage to Butcher, and feated. My turn was a total wash because I had no guns able to shoot (Butcher was engaged and Kell was dead) so I camped all 6 Focus and hoped for the best.

My opponent's dice failed him big time on his turn so Butcher feated and clobbered Saeryn on my next turn. Hooray 2-2!

Saturday night ended a lot earlier than Friday night did so I was able to get another game in on Sunday morning against a Zaal list. This was my only 50 point game of the weekend so I added tweaked my normal 35 point Grim list to include an Earthborn and Blitzer. 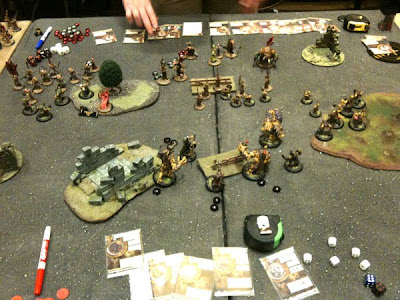 I made a terrible distance judgment in the second turn that resulted in my Bomber and Blitzer being half an inch too short to make their shots and it cost me the game. His army started winning an attrition game and I couldn't swing the momentum back in my favor.

A very fun game against a very nice opponent and a fantastic way to end my Templecon experience. I cashed in my Iron Arena points for the black dice back and red Templecon dice in the last photo of the previous post, packed up my Trolls, and headed back to Boston for a serious nap. I'll absolutely be back to Templecon next year if I'm still in the New England area.
battle reports hordes templecon 2011 trolls