Posted by Simon on January 07, 2011
Practice for Templecon has begun!

Opponent - Siege list with a ton of guns designed to maximize damage on feat turn.

What I learned - The Earthborn missile works! I got a turn 2 hit on Siege with a 13" charge on a Ranger and 2 Goad moves. Sometimes your dice just aren't working - I wasn't able to roll an 8 on three dice TWICE and only had one Fury to buy attacks on Siege when I got there. Positioning is going to be tough with this list. The beasts outpace everything in the list so I'll need to figure out how to keep Doomie and the Runebearer up with them. Also, there is no way the Whelps will tie stuff up since they're only SPD 5. They may get relegated to being screens for Doomie. 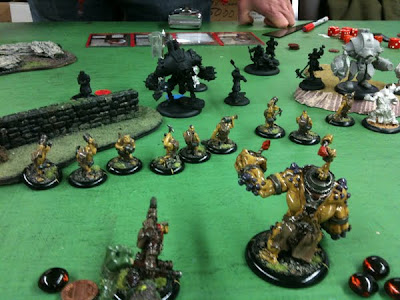 Sorcha in the top right - just outside of Grim's feat is close enough for her to kill me
What I learned - This list wasn't build for Killbox and didn't perform well in that scenario. I was doing pretty well in attrition, trading 2/3 of the Scouts for most of the Winterguard, Joe, and the Widowmakers. I lost to Sorcha 101, a Wind Rush + charge + feat assassination run that I absolutely should have seen coming. I only left myself 2 Fury for transfers because I had Grim cast the Swamp Troll's animus, thinking it would up my DEF and help me stay alive. DEF doesn't matter when you're stationary and I would have survived with the extra transfers.
battle reports hordes IABN khador templecon 2011 trolls warmachine